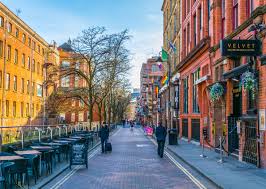 Margaret grew up during World War II and nightly German bombing.  It was at this time that two U.S. Army Air Corps soldiers were quartered at her home, there being a shortage of housing.  From these soldiers, one of whom was from Ohio, Margaret developed a deep love of America.

Margaret served in the Royal Air Force in the early 1950s, where she met her first husband, David Poole.  In 1963 they emigrated to America, settling at Lake Milton, where other English families and friends were already in residence.  For the rest of her life, Margaret resided in her treasured home on Grandview Road.  Many Lake Milton residents will remember her as the smiling and waving old lady who walked, every morning, year round, to the old Ashland gas station on Route 18, where she had many friends.

Margaret is preceded in death by her husbands David Poole and Paul Pemberton; her son Wayne, her parents; brothers Peter and Martin; and sister Kathleen.

She is survived by her son, Steven; niece, Kay Bartlett of Lake Milton; several other nieces and grandnieces; and other family members in the Manchester, England area as well as in Ireland, including her cousins Breige and Julie, all of whom she kept in touch with despite time and distance.

To all her friends at Lake Milton: when you drive on Grandview in the mornings, something will be missing.  Think of her.

To send flowers to the family or plant a tree in memory of Margaret M. Pemberton, please visit our floral store.

You can still show your support by sending flowers directly to the family, or by planting a memorial tree in the memory of Margaret M. Pemberton